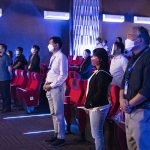 Despite the pandemic that almost crippled the Philippine economy, the Authority of the Freeport Area of Bataan is financially stable, thus said AFAB Administrator Emmanuel D. Pineda in his 4th state of the freeport address on Friday.

Pineda said the AFAB now has a grand total of P40.6 billion actual investments. He said there was a P26.4 billion increase in committed investments from the end of last year’s P14.2 billion.
The Freeport Area of Bataan (FAB) was cited by the Philippine Statistics Authority as the only Investment Promotion Agency (IPA) that attracted more foreign investments in the first quarter of 2021. A total of P164 million was remitted by AFAB to the national government.
FAB now has 143 registered enterprises, from 39 during the era of Bataan Economic Zone.

Pineda said there was a 244 percent leap from 12,777 employees to 43,990 with the regularization rate peaking at one point to more than 80. He thanked the FAB workers and employees as well as the provincial government for the support and sheer effort to make things happen at the freeport.