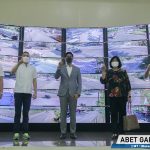 Governor Albert S. Garcia and the Metro Bataan Development Authority (MBDA) officially launched the No Contact Apprehension Program (NCAP) yesterday for the efficient management and monitoring of traffic along the length of its main thoroughfare, the Roman Expressway.

This initiative is in line with the Provincial Government’s thrust to make Bataan a world-class province through unique systems and advanced solutions and technologies to provide a better quality of life for all Bataeños. Gov. Garcia said in his message during the launch, “This breakthrough, visionary program will assist our municipalities, cities, and their respective traffic enforcers in the observance of traffic rules and regulations and apprehend reckless motorists especially now that our 68-kilometer expressway is experiencing an influx of large vehicles transporting goods and cargoes.

Add it to the fact that we have within our midst the Freeport Area of Bataan, the largest and fastest growing freeport in the Philippines.” Garcia added, “We are proud that our province is the host of the fastest growing freeport in the country. However, we cannot sacrifice the safety of Bataeños who share the road with traversing motorists. With the help of NCAP, we are provided with additional layer of safety in ensuring that those who do not follow traffic rules in Bataan will be apprehended and educated to curb the presence of reckless drivers plying our roads”.

The NCAP program utilizes state-of-the-art cameras with artificial intelligence technology meticulously monitored at the 1Bataan Command Center that can accurately capture the conduction sticker and plate number of erring motorists. The data is then stored at the information database of the Land Transportation Office (LTO). When the system detects a violation, a Notice of Violation (NOV) will be sent to the registered owner of the vehicle upon review and approval of the Bataan Traffic Adjudication Board (BTAB). This document will include the place and time of the violation, along with the corresponding fines and penalties.

MBDA General Manager Christopher Pizarro said, “Contactless apprehension will be a big help to our MBDA enforcers as it minimizes face to face interaction especially during this time of the pandemic. There will be no need for arguments between violators and enforcers. The cameras will be working for us 24 hours a day. Asahan po ninyo na pag hindi po sumunod sa batas trapiko, NOV po ang matatanggap.”

Bataan is the first province to implement the NCAP. The same system was previously launched in Parañaque, Valenzuela, Manila, Cauayan, and more recently Quezon City. “This is a program that Bataeños can be proud of. Your local government now implements this breakthrough technology to ensure that our citizens are safe regardless if they are the driver of the motor vehicle, a commuter, or pedestrian. Inaalagan po namin kayo at isinisigurado po namin na ang mga irresponsableng mga nagmamaneho ay hindi makakalusot sa ating mga daan” Garcia concludes.