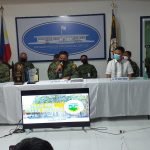 Tampis also reported about 373 other anti-illegal drugs operations wherein 585 suspects were arrested, 429 grams of shabu confiscated; seven kilos and 801 grams of marijuana were seized. The said items had a total value of P2.8 million.
He said the police command likewise conducted raids on 151 illegal gambling operations where 709 suspects were arrested and P247,164 worth of bet monies were seized.
In its campaign against loose firearms, the PNP conducted 53 operations, arrested 53 suspects and seized 54 unlicensed firearms.