Enforcement of NCAP to start immediately 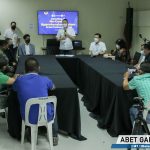 Enforcement of NCAP to start immediately

Bataan Governor Abet Garcia warned motorists, a day after the launching of the No-Contact Apprehension Program (NCAP) that enforcement of said program will start in the next few days Motorists traversing the 68-km Roman Superhighway who do not follow traffic rules in Bataan will be apprehended and educated to curb the number of reckless drivers plying along the roads.

Gov. Abet said that a notice of violation based on an ordinance approved by the Sangguniang Panlalawigan will be issued to the traffic violator for a specific or multiple violations with the corresponding penalties such as failure to wear prescribed seat belt device, failure to use motorcycle helmet, anti-distracted driving, driving an unregistered vehicle, disregarding lane markings, over speeding.

Mr. Manolo Steven Ona, QPAX traffic system representative, said that the NCAP utilizes state-of-the-art artificial intelligence technology that can accurately capture the conduction stickers and plate number of the vehicle of the erring motorists through the information database of the Land Transportation Office (LTO).When the system detects a violation, a notice will be sent to the registered owner of the vehicle upon review and approval of the Bataan Traffic Adjudication Board (BTAB) which includes the place and time a violation was committed with the corresponding fine to be paid.

The post Enforcement of NCAP to start immediately appeared first on 1Bataan.