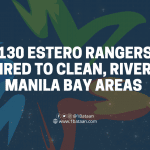 Penro Raul Mamac said that DENR Bataan hired 130 estero rangers to help clean rivers in the province and other Manila Bay areas. Said estero rangers clean Bataan rivers and coastlines, every day; man trash traps placed in rivers all over the province and check establishments for their liquid wastes. “We dont want waste waters from establishments to reach Manila Bay”, Mamac pointed out. Sometimes clean-up activities are conducted with estero rangers in coordination with other stakeholders like the women, youth, and 4Ps beneficiaries. Mamac shared that former environment secretary Roy Cimatu did not lay off estero rangers despite constrained mobility during the height of the pandemic to help them tide through the difficult time. An estero ranger receives a monthly salary of P12,500.