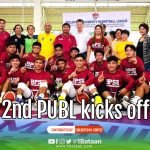 PUBL will serve as a qualifying tournament for registered university members of FESSAP that will represent the country in upcoming Asian regional meets, like the 12th Asian University Basketball Championship, 3rd Asia Pacific University Games, and the Asia University Championship. PUBL will be a one-month tournament and games will be held every weekends.

The post 2nd PUBL kicks off appeared first on 1Bataan.