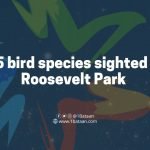 Prior to becoming a national park, the area is actually a bird sanctuary, said ecosystem management specialist JM Arroz of Cenro Dinalupihan. “We are still recording new bird species”, he added.

“High number of bird species is recorded, which means there is high biodiversity index in Roosevelt Park”, he added.

Roosevelt Park is about 150.42 hectares, sprawling over Dinalupihan barangays of Roosevelt, San Pablo, and Bangal, and a portion part of Tipo, Hermosa, said the DENR officers.

Cenro Dinalupihan information officer and the two officers were guests at the radio program ‘Bataan at Kalikasan’ 91.1 Sikat FM on Friday.