A light of hope 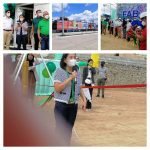 A light of hope

At the Inauguration of the Dinalupihan Ecozone, Mayor Gila Garcia thanked Atty Elmer Sy, operator of the Dinalupihan Woodlands Economic Zone for playing an important part in equipping their town with a competitive economy, sustainable environment governed by good leaders.

After two years of pandemic, Mayor Gila said that, from the negative impact on our economy; OFWs were sent home, most of our people became jobless, businesses closed and many more, this development is truly a light of hope at the end of the tunnel for our constituents.

Mayor Gila added that Bataan has risen from the pandemic and with the law passed by Cong. Joet on the extension of the economic zones, many municipalities and cities will now have the opportunity to attract investors, by giving fiscal and non-fiscal incentives.

Mayor Gila is very optimistic that Bataan will soon be the economic regional hub in the entire country, with the kick-off at the Dinalupihan Woodlands Economic Zone, the first ever private company to register outside Mariveles and that many will follow on its success.

The post A light of hope appeared first on 1Bataan.