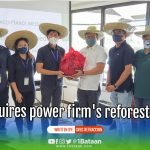 More than 31,000 fruit bearing trees, most of which are cashew, callandra, banaba, indian mango, avocado, santol, lemon, acacia manglum and other species are things to behold on the 48-hectare sloppy coastal land in Sitio Karagatan, in Barangay Alas-asin, Mariveles, Bataan.

The GMEC Sitio Karagatan Reforestation Project was started by GN Power coal-fired power plant as part of its corporate social responsibility (CSR) since 2014. The power firm spent more than P9 million with seven caretakers who had been maintaining the site and planted it with different tree species including bamboo.

Hazel Keith Elloren, information officer of Authority of the Freeport Area of Bataan (AFAB), said Chairman Emmanuel D. Pineda wants to meet with caretakers of the reforestation site and map out plans to convert it to a source of livelihood for the less-fortunate sector.

A memorandum of agreement was signed between GMEC and AFAB to develop the site. Since 2014, the GMEC paid the salary of seven plant caretakers but lately the AFAB is considering to take responsibility for them, Ms. Elloren said. Pineda recently awarded plaques of appreciation to the seven caretakers who seem to love their work at the reforestation site where they also benefit from fruit trees they cared for in the last eight years that they have been there.