AFAB, GA, and DND to develop a defense industry economic zone in Bataan 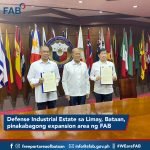 AFAB, GA, and DND to develop a defense industry economic zone in Bataan

The Authority of the Freeport Area (AFAB) has established a mutually beneficial economic relationship with the Government Arsenal (GA) in Limay, Bataan as both parties signed a Memorandum of Agreement on the proposed declaration of GA’s 370.371-hectare Defense Industrial Estate (DIE) as the newest FAB Expansion Area (FEA) on 27 June 2022 at the Department of National Defense Building, Camp Aguinaldo, Quezon City.

The aforementioned MOA engages both the AFAB, headed by Administrator Emmanuel D. Pineda, and the GA, under the authority of Acting Director MGen Arnold Rafael Y Depakakibo AFP (Ret), to work collaboratively in the establishment and operation of the GA FEA as a sustainable defense-industrial base, with the goal of encouraging investors in defense projects to generate employment opportunities in the province as well as income for the government. Expected gains from this joint venture would help sustain the government’s Armed Forces of the Philippines (AFP) modernization program in line with the national policy of defense self-reliance.

Also present during the signing was Department of National Defense (DND) outgoing Secretary Delfin N. Lorenzana, who approved the undertakings of both parties given that the GA is an agency under the DND. In his statement, Secretary Lorenzana underscored the significance of this partnership in the government’s longstanding plan to establish defense industry economic zones across the country.

“Today is a great day to celebrate cooperation and the spirit of collaboration… the DND has always intended to stimulate the local defense industry, and this joint venture is a monumental step in that direction. As you all know, the AFP is nearing the peak of its modernization efforts that are aimed at achieving a stronger defense posture for our country, and today’s event will hopefully jumpstart material acquisition from foreign defense industries,” Secretary Lorenzana said.

Secretary Lorenzana also acknowledged the efforts and contribution of Bataan 2nd District Representative Jose Enrique “Joet” Garcia III for the fulfillment of this milestone that will undoubtedly usher in progress and development for the province.

The post AFAB, GA, and DND to develop a defense industry economic zone in Bataan appeared first on 1Bataan.