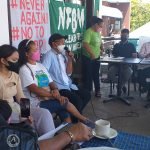 The Nuclear-Free Bataan Movement (NFBM) issued on Friday a covenant to ask the national government to revoke Executive Order No. 164 seeking to operate the mothballed Bataan Nuclear Power Plant (BNPP) in Morong.

Earlier, Bataan Gov. Albert Garcia announced he was against the operation or rehabilitation of the BNPP, instead the 50-year old structure should be converted to a cloud computing hub owing to its secured area. Garcia said rehabilitating the BNPP structure would be costly.

In a recent press conference, the NFBM demands to reject the BNPP as energy source. Atty. Dante Ilaya, NFBM chairperson, said it is about time Bataan folks and the Filipino people launched a renewed campaign against the deadly, dangerous and debt-trap BNPP.

Last February 28, despite community-led opposition to nuclear energy, President Duterte signed Executive Order No. 164 which outlines a national position for a nuclear energy program including the possibility of rehabilitating BNPP.

Ilaya and other cause-oriented groups were one in saying that Bataan residents find this move not only illogical and unacceptable, but a clear deception of the Filipino people who will be trapped into a huge debt and needlessly exposed to a deadly and dangerous future.