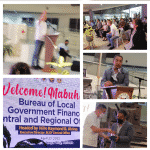 During the First Quarter, Fiscal Year 2022 Planning and Directors Conference in Bataan, Bureau of Local Government Finance (BLGF) Executive Director Nino Raymond Alvina, in his message during their courtesy call to Gov. Abet Garcia said that, they were amazed by the several achievements not only in fiscal governance but in all areas of governance in Bataan.

He added that all of them will return to their respective offices filled with insights and learnings from the Bataan model as a high caliber and first class province in the Philippines.

Alvina commend the leadership of Gov. Abet Garcia as well as the heads of the different departments of the Provincial Government of Bataan in implementing their best practices in local fiscal and governance during the COVID-19 pandemic.

He said that, the province was awarded the Most Business LGU for the 2nd time in 2021 for restoring business operations thru significant and innovative actions amidst the pandemic, mentioning efforts in sustainable investments, infrastructure and leverage in the digital economy as well as setting up 29 vaccination sites in different municipalities and the vax on wheels.

He added that Bataan was also awarded the Seal of Good Local Governance for four consecutive years due to its steady economy, decline of poverty incidence, low inflation and high savings rate elevating the quality of life of Bataeños.

BLGF Memorandum Circular no. 31, Director Alvina said, recognizes provinces, cities and municipalities in local revenue generations for fiscal year 2020 and Bataan was the lone working LGU having been ranked 2nd Top Performer among all the provinces nationwide in terms of the highest nominal locally-sourced revenues.

Lastly, Executive Director Raymond Alvina said that they hope in the succeeding recognition programs, Bataan will still prove to be a consistent achiever because of the many best practices and continuous innovations in fiscal governance which are solid testament of good governance.

The post Bataan, a first-class province appeared first on 1Bataan.