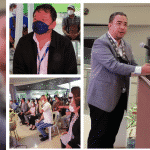 Bureau of Local Government Finance (BLGF) Executive Director Nino Raymond Alvina gave special recognition to the Provincial Assessor’s Office and that they will use Bataan, as a proof-of-concept in revising the Assessors Manual used all over the country.

Director Alvina said that it was late 2017 when he met Engr. Ricky Herrera, head of Bataan Provincial Assessor’s Office, and presented to the BLGF Bataan’s best practices in real property assessment, that lead to very good tax administration, as well as in tax administration.

Alvina expressed his gratitude to Gov. Abet Garcia for allowing Engr. Ricky Herrera to be part of their discussion as an expert resource person especially now that they are revising the Assessor’s Manual.

Previous Church offers prayers for the coming election Next Bataan, a first-class province