Bataan, at the forefront of green industrialization 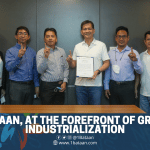 Bataan, at the forefront of green industrialization

Relative to the Province’s bid to generate clean energy and lessen carbon footprint, the Provincial Government of Bataan granted the Original Proponent Status (OPS) to Citicore Power Inc. for the installation of solar systems on unutilized rooftops of local government-owned facilities within Bataan through Public-Private Partnership (PPP) yesterday, July 12.

Gov. Joet, Garcia, in his short message, highlighted the need to lessen dependence on coal-generated energy, especially in the transportation system. He, later on, thanked the PPP Investment Center for their hard work in attracting investors to generate livelihood for Bataeños.

“We’ve always wanted to do business in Bataan and preferred doing business here because of the strong support of the local government,” Citicore Executive Vice President Manolo Candelaria said.

Mr. Candelaria also stressed that Citicore is committed to its vision of helping our country attain energy security that is less dependent on fossil fuels and eventually empowering communities.

The post Bataan, at the forefront of green industrialization appeared first on 1Bataan.