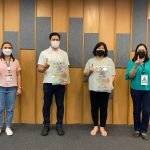 In bagging the National Anti-Drug Abuse Council (ADAC) Performance Awards for two consecutive years (2019 and 2020), the Provincial Government of Bataan (PGB), has proven that it continues to lead the fight against illegal drugs.

Led by DILG Bataan Provincial Director Myra Moral-Soriano, plaques of recognition were given to Vice Governor Cris Garcia and Board Member Popoy Del Rosario in simple rites at The Bunker last February 3.
The Barangay Anti-Drug Abuse Council (BADAC) Functionality, Drug Clearing, and Reduction of Drug Affectation are the criteria of DILG for the ADAC Performance Award. These include the 2019 and 2020 BADAC Functionality Audit Results, PDEA National Office Drug-Clearing Data for CY 2019 and 2020, and the PDEA National Office Drug-Affectation Data for the said calendar years.

The National ADAC Performance Award is given to LGUs with high ADAC functionality scores, in recognition of their outstanding efforts in the performance of their duties in reinforcing the national government’s anti-illegal drug campaign.