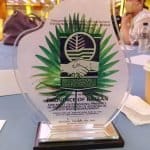 With the approval of the 10-year solid waste management plan of the province, the Department of Environment and Natural Resources-Environmental Management Bureau (DENR-EMB) Central Luzon hailed Bataan as the Most Outstanding Province in the implementation of ecological solid waste management during the 2022 Environmental Recognition of Outstanding Local Government Units and Stakeholders on Best Practices on Ecological Solid Waste Management held at Widus Hotel, Clark, Pampanga last June 29.

The Provincial Government of Bataan, through its PG-Environment and Natural Resources Office headed by Engr. Vic Ubaldo, has been prolific in materializing the programs under its SWM Plan such as the reduction of single-use plastic, ‘no segregation, no collection policy’, plastic chair factory, and Information and Education campaign on waste segregation. Recently, in celebration of National Environment Month, Bring Your Own Baunan (BYOB) program was launched at The Bunker where capitol employees bring their own lunchboxes in order to lessen the waste generated by the government facility.

Committed to supporting the 11 municipalities and lone city for their respective Solid Waste Management Plans, the Provincial Government of Bataan has also signed a Joint Venture Agreement (JVA) with Basic Environmental Systems and Technologies Inc. (BEST) through a Public-Private Partnership for the establishment of the Bataan Engineered Sanitary Landfill Facility (BESLF) which was followed by a groundbreaking ceremony for the said project located in Brgy. Capitangan, Abucay.

Once constructed, each municipality will transport its waste in BESLF which is expected to lessen the cost of its treatment as the province has an ongoing MOA with an accredited hauler located in a different province for its waste treatment.

To date, each LGU and its barangays has its respective materials recovery facility and an approved ten-year solid waste management plan as well.