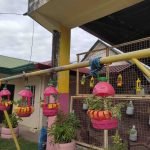 BECA is an initiative under the Manila Bay Clean-up, Preservation and Rehabilitation Program that grants economic incentives and assesses the compliance of barangays to the pertinent provisions of Republic Act 9003 otherwise known as Ecological Solid Waste Management Act.