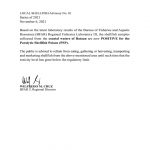 The provincial government through the agriculture department met on Monday to determine the extent of red tide toxin and possible assistance to local fishermen affected by the phenomenon.

In November 2010, the red tide menace forced the provincial government of Bataan to declare a state of calamity in the coastal towns of Orani and Samal.

The paralytic shellfish poison had sent thousands of “tahong” gatherers in the province jobless.