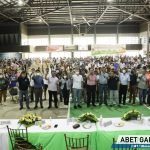 In response to the continuous increase in oil prices, the Department of Agriculture on Tuesday, led the distribution of the Rice Competitiveness Enhancement Fund-Rice Farmer Financial Assistance (RCEF-RFFA 2) to more than 8,000 farmers and fishermen in the Province of Bataan.

Bataan Governor Abet Garcia and Dinalupihan Mayor Gila Garcia also joined Sec. Dar and other key officials of DA in the distribution of the said financial assistance held at the Dinalupihan Civic Center.

“Now that Dinalupihan Mayor Gila Garcia, who started the 1Bataan Agriculture Innovation and Technology Center in his town, will serve in the congress, I believe that more attention will be given to the needs of farmers in our Province,” Gov. Garcia said.

Garcia added that despite the ongoing crisis, they will continue to support and strive to achieve Bataan farmers’ goal of having a bountiful harvest, high income, and a better life for those in the agricultural sector.