Bataan hog industry to get P85M 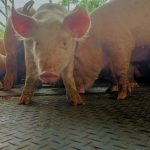 Bataan hog industry to get P85M

Hog raisers in Bataan affected by pernicious African swine ever (ASF) will soon get a shot in the arm in the next few months with the more than P85 million assistance from the Department of Agriculture.

“Hopefully, implementation of the program will be until second quarter of the year,” Venturina said. The DA said the country’s hog industry is finally recuperating two years after the ASF devastated almost 3,000 barangays (villages) including those in Bataan.

Early cases of ASF were detected in August 2019 in the towns of Dinalupihan, Hermosa,, and much later in Orani, Samal, Bagac and Morong.

The post Bataan hog industry to get P85M appeared first on 1Bataan.