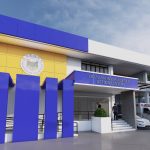 Strategically located along Bataan’s coastal areas and provincial boundaries, the 1BIAAC will be jointly manned by the aforementioned agencies within the province, the goal of which is to strengthen border security, respond immediately to crimes, accidents, and natural and man-made disasters.
Said project is in compliance to Executive Order No. 546 s. 2006, directing the Philippine National Police to undertake active support to the Armed Forces of the Philippines in internal security operations, as well as to Executive Order No. 63 signed by Governor Garcia, that orders to create and organize a Technical Working Group (TWG) for the establishment and operation of 1BIAAC in the province.
For the initial implementation of the project, three (3) pilot areas have been identified at Brgy. Alas-asin, Mariveles, provincial boundary of Bataan and Pampanga at Brgy. Balsik, Hermosa, and provincial boundary of Bataan and SBMA at the SBMA Gate in Brgy. Mabayo, Morong.

Furthermore, the 1BIAAC will contribute significantly in the monitoring and provision of emergency assistance due to the influx of travelers entering or visiting Bataan once the 32-kilometer Bataan-Cavite Interlink Bridge becomes operational.