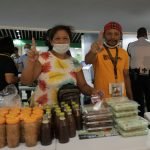 In line with one of our government’s thrust programs, that is providing much needed assistance to elevate the quality of life of our indigenous brothers, the Aetas, the “Talipapa para sa mga Kapatid na Ayta, Tulong Kabuhayan sa Panahon ng Pandemya” was officially launched today, March 4, at the ground floor of The Bunker at the Capitol, in Balanga City.

For two months, every Friday, from 8 A.M to 5 P.M., employees of the Provincial Government of Bataan, as well as visitors and those with transactions at the various government offices and agencies at The Bunker, could buy fresh vegetables and fruits such as sweet potatoes, bananas, tomatoes, string beans, squash, and foods, such as atsara, honey, and eggs.

Said project is an initiative of the Bataan Police Provincial Office’s led by Provincial Director Romell Velasco and its 1st Provincial Mobile Force Company under by PLTCOL.

The post Bataan IP produce market at the Bunker appeared first on 1Bataan.