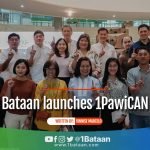 September 15, 2022 - In News By Maria Vinnise Marcelo Comment off

“Our long-standing Pawikan Conservation Program which started as a community-based initiative in Morong in 1999, has yielded an outstanding partnership between the government and former poachers when they became partners in conservation through our campaign initiatives… This [1PawiCAN] will also expand the current program to go beyond the conservation of Pawikan population in its infancy as well as address the challenge of transboundary cooperation and linkages with external support and donors.” This was part of Gov. Joet Garcia’s message during the Multiparty Memorandum of Agreement Signing for the establishment of 1PawiCAN held this morning, September 15 at The Bunker.

The 1Bataan Pawikan Conservation Alliance Network, or 1PawiCAN, aims to strengthen efforts for marine turtle conservation of different stakeholders by uniting them and creating a body from different areas in the province.

Through this network, there will be sharing of experiences, knowledge, skills, and resources for pawikan conservation and protection.