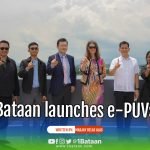 To mitigate the impacts of climate change, the Provincial Government of Bataan (PGB) under the leadership of Governor Jose Enrique Garcia III will soon launch the Bataan Electric Public Utility Vehicles Program, a development initiative that aims to shift the province’s transport system to green mobility.

During a courtesy visit at The Bunker today, September 9, of officials of Global Green Growth Institute led by Deputy Director-General Helena McLeod, Gov. Joet Garcia laid down the Province’s initiatives to make Bataan the first carbon-neutral province in the Philippines.

A pre-feasibility study conducted by PGB in cooperation with GGGI was completed last May 2022. Identified routes for the e-PUVs are from Balanga to Dinalupihan, Balanga to Lamao and Balanga to Mariveles wherein the high volume of commuting public was taken into consideration. Charging stations will be put up in strategic locations in the province that could also cater to owners of private electric vehicles.

Gov. Garcia recognizes GGGI as one of the Province’s formidable allies in its pursuit of promoting environmental protection through green projects and investments.