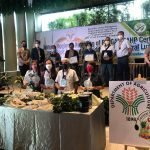 Bulacan Provincial Governor Daniel Fernando graced the event and expressed his commitment and support to the Province-led Agriculture and Fisheries Extension Systems (PAFES). The signing of memorandum of agreement for PAFES was also conducted.
Another highlight of the event was the unveiling of the new PhilGAP Food Safety Logo and the placing of barcode stickers on produced crops.

Previous “If there’s a will, there’s a way” – Vice Gov. Cris Garcia Next BFAR gives aid to Hermosa fisherfolks