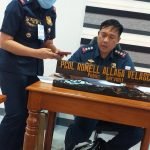 About 570 uniformed policemen and policewomen will be deployed in different polling centers throughout the province of Bataan. This was disclosed Monday afternoon by Police Col. Romell Velasco, acting Bataan police director during a news briefing at Camp Tolentino police headquarters in Balanga City.

“Bataan is among the country’s peaceful provinces, but we are not taking chances,” Col. Velasco said. Velasco who had been previously assigned as police chief in different municipalities in the province also held key positions at the Camp Tolentino and Camp Olivas, the regional police office.

His vast experience in the Bataan peninsula had become his stepping stone to higher post. “Right now we are concentrating on gun ban violators and other election related incidents,” Velasco explained.