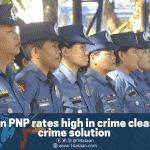 “We are satisfied to tell you that we have high rating in crime clearance and crime solution”, he told in vernacular to Bataan newsman in a press conference at Camp Tolentino on Monday.

He said the Regional Investigation and Detective Management Division in Camp Olivas, Pampanga that gathers reports and statistics in each province in Central Luzon, reported high crime clearance and high crime solution for the province of Bataan.

“Crime solution is when we capture the perpetrators. Like in the case of killing suspects we are able to apprehend in Sta. Rosa, Pilar, the altercation that started among neighbors due to a dog. The barangays officials helped the police to solve the crime”, he narrated.

“Identifying the perpetrators without yet capturing them, that is crime clearance. Like in the recent case of killing in Mariveles, because of diligent investigation of our Mariveles police, the suspect was identified”, the provincial police chief said.

He did not name yet the suspect to newsmen so as not to jeopardize the follow up operations but gave hint to the possible motive.