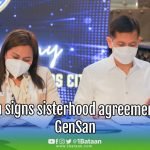 In his speech Gov. Joet Garcia. said that despite today’s societal difficulties, he believes that through cooperation and solidarity, we may redeem what has been lost.