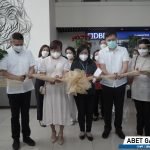 April 4, 2022 - In News By Jhonder Salazar Martinez Comment off

As part of the celebration of the 80th anniversary of the Day of Valor (Araw ng Kagitingan) anchored on the theme “Kagitingan ng mga Beterano, Inspirasyon ng Nagkakaisang Pilipino”, Gov. Albert Garcia led the ribbon cutting to officially open today, April 4 the Bataan Trade Fair at The Bunker.

A total of 53 Micro, Small, and Medium Enterprises (MSMEs) noted for their food and nonfood products, and the municipalities of Dinalupihan, Morong, Orani, Hermosa, Pilar, and the City of Balanga participated in the trade fair.