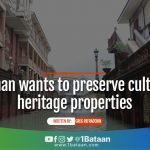 Bataan Gov. Joet Garcia had asked the Sangguniang Panlalawigan to draft a resolution approving and adopting the cultural heritage preservation division of the provincial government. Likewise, the governor wants the “Bahay-Wika” and master apprentice language learning program as the official entry of Bataan to this year’s Philippine Heritage Awards.

In his request, Gov. Joet said the two – institutionalized division and learning program under the “Safeguarding of Intangible Cultural Heritage” category will vie as official entries for the heritage awards to be submitted to the National Commission for Culture and the Arts (NCCA).

“We believe that participating in such programs of the national government will provide our province a great opportunity to be recognized in the field of cultural heritage preservation,” said the Governor.