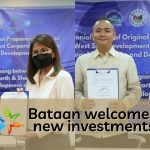 “Being one of the most progressive provinces in Central Luzon, Bataan has significantly contributed to the diversification of investments as well as the creation of job opportunities, to the creation of new wealth, to the development and growth of our citizens, and to the overall attractiveness of the Philippines being an investment hub,” Northwest Star Development Corporation Corporate Secretary Atty. Jade A. Lapinig said during a short ceremony of the Bataan Public-Private Partnership for new investors in the Province held at The Bunker yesterday, June 29.

Northwest Star Development Corporation was granted an original proponent status in view of their intent to develop the land for the Bataan Emerging Gateways City in Mariveles, which allows the investor to move on to the next step of the PPP Process, the detailed negotiation.

“Bataan remains to be one of the most promising, competitive, and PPP-prolific provinces in the country and we need these because we want to create economic activities, generate jobs, expand the tax base, and provide better lives and services to our people,” Gov. Abet said.

The outgoing governor also represented the Provincial Government of Bataan in the signing of the Joint Venture Agreement with the Earth and Shore Destination Communities Corp. (ESDCC) for the development and construction of FAB F.O.R.E.S.T. which is expected to house investments in relation to Food, Over-all health, Renewable Environment, Science and Technology.

Another interested investor, Citicore Power, presented its proposal to the PPP Selection Committee in establishing renewable energy sources in Bataan, aligned with the province’s aim of reducing carbon footprint and achieving its long-term goal of lessening dependence on gasoline and non-renewable energy sources.

Gov. Abet, expressed his gratitude to these proponents for trusting the government and the province to host these investments as well as the Bataan PPPIC headed by Abul Khyr ‘Khairy’ Alonto III for its hard work in attracting and welcoming these new investors.

Previous Gov. Joet underscores 1Bataan ideology Next Gov. Abet: We face challenges in the next 3 years