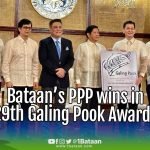 The governor thanked everyone who worked hard for the success of the PPP program which is now a catalyst for the continuing economic development in the province.

Galing Pook is a leading resource institution that recognizes, capacitates, and promotes innovation, sustainability, citizen empowerment, and excellence in local governance. Since it started in 1993, Galing Pook has empowered hundreds of local government units to develop programs and social innovations through the Galing Pook Awards, Galing Pook Academy, and Galing Pook Advocacies.

Bataan PPP’s innovative thrust maximizes the LGU’s limited resources while pushing for economic development by cultivating strong business partnerships between the government and the private sector.

Gov. Garcia said, “Learning from the successes of our PPP Program, we institutionalized the first and only LGU department dedicated to PPP to engage and empower the private sector more by further promoting transparency, improving ease of doing business and shifting the business mindset towards collaboration. This paves the way for faster delivery of services for our people, greater support for province’s entrepreneurs and the generation of more than PhP169 billion in pledges since 2019, PhP3B of which have already been completed.”

Bataan has institutionalized the PPP process which enable them to pursue projects can that are critical for economic development through a Provincial Ordinance approved on February, 2013 and Executive Order 68 which sets the guidelines for unsolicited proposals.

Through these, the Provincial Government of Bataan (PGB) is able to better manage all PPPs through the creation of the first & only provincial level Public Private Partnership Investment Center (PPPIC) composed of 19 highly qualified individuals assigned to three divisions: Local Economic Development and Investments Promotions (LEDIP), the PPP and the Administrative Office.