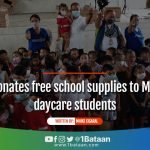 This is part of their CSR or corporate social responsibility. Engr. Ruiz also thanked the cooperation of barangay officials, LGU-Mariveles, Bataan Provincial Government, and the offices of the Bataan 3rd District Rep. Gila Garcia and 2nd District Rep. Abet Garcia for making their project possible.

About two years ago, at the height of the pandemic, in support of the interventions of the province to help curb confirmed Covid-19 cases recorded in the province, BBJVI donated cash and relief goods to the Provincial Government of Bataan (PGB), and these two villages.

Also on that same occasion, one of BBJVI locators, Mariveles Grains Corp. (MGC), led by Mr. Albert Bautista, lent support to the two aforementioned barangays by donating 2,500 packs each of relief goods.

BBJVI has also donated various assistance to other Mariveles villages for their Covid-19 and other humanitarian response efforts.