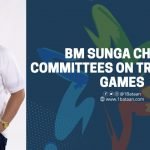 Neophyte Board Member Angel Sunga is entrusted by his colleagues at the provincial legislative body of the chairmanship of the Committee on Transportation and Communication, and Committee on Games and Amusement. He vowed to do his best in chairing the two committees.

BM Sunga was three-term councilor of Mariveles before elected board member of the 3rd district of the province last May and was noted for efficiently handling the Committee on Health as chairman at Sangguniang Bayan Mariveles which is in sync with the thrust of then congressman and now Gov. Joet Garcia, and made the populous Mariveles smoke-free.

While currenlty residing in Mariveles, Sunga grew in adjacent Bagac, also part of the 3rd district.

During the Bataan SP inaugural session, skippered by Vice Gov. Cris Garcia, the composition of all SP committees was completed. A committee has a chairman, 2 vice chairmen, and 4 members.