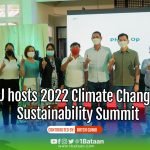 Gov. Joet Garcia said the summit strengthens the role of government, private sector, and other stakeholders in protecting the environment. But he added, the summit elicits shared feeling that we have to act against real threat climate change.

Garcia stressed that with passion, task though gargantuan is not impossible.

The governor described the staging of climate change summit as timely and laudable as he congratulated officials of BPSU especially its President Dr. Greg Rodis.

In his message, Rodis said, “As brothers’ keepers, we must care of the future and work together”. In dealing with climate change, he said “We must use all technologies available”. “Let us band together for the next generation”, the BPSU president urged.

The activity also aimed to share lessons and perspectives in accelerating awareness on environment sustainabilty among higher education institutions.BPSU has established the Office of Environmental Sustainability.