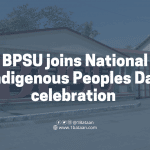 In his message, BPSU President Dr. Greg Rodis said BPSU supports the National Commission on Indigenous People in preserving cultural diversity and distinctiveness without prejudice and discrimination but with high honor in heritage, customs, and colors and practices of various indigenous groups in the country.

An Aeta community is in fact settled near the upland BPSU Abucay campus.

NCIP said the activity aims to increase public awareness and continue efforts to protect the rights of indigenous people.