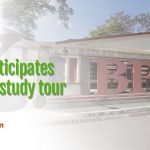 For the first time, Bataan Peninsula State University (BPSU) was able to send a student-delegate to the much-anticipated Asian Association of Agricultural Colleges and Universities (AAACU) Study Tour for Students being participated by students of the members of association all over the continent. “This is actually a milestone for us considering the university has been a member of the association for quite some time”, said BPSU Vice President for Research, Extension, and Training Services Dr. Hermogenes Paguia.