BTN POP: The future of music and film in Bataan 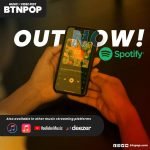 BTN POP: The future of music and film in Bataan

BTN Pop, a music and video event which aims to bring together talents in the province of Bataan in a multimedia affair launched its full album on Spotify and other music streaming platforms last September 10.

BTN POP the album, written, performed, and produced by various songwriters and artists in the province consists of the 10 original song finalists including the spoken word piece written by Mai Cantillano, plus two versions of its theme song entitled ‘Tayo Naman’.

The idea is to have a platform where all the talented songwriters, filmmakers, and song artists in Bataan would have a chance to showcase their talents. “It was once a dream to have this kind of opportunity, and it feels surreal that now, we’ve actually launched the event and now released the album,” said Gabriel Jessie Guevarra, one of the people behind BTN POP.

It will be remembered that in June of this year, they opened the call for those who are interested to be part of the music and video fest as an artist, filmmaker, and songwriter.

From the province-wide screening of talents, only 10 original songs were picked, which then went to the meticulous music recording phase with local artists. These songs will then be transformed into music videos by select local film makers which will be out on September 16 through their official Facebook page and Youtube channel.

The people behind BTN POP are hopeful that through this initiative, Bataan will also be known as the province of talent and creativity in the field of music and film industry.

The post BTN POP: The future of music and film in Bataan appeared first on 1Bataan.