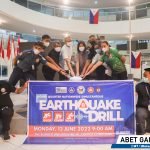 The Bunker Property Management Office (PMO), as part of its strategic initiatives, conducted the 2nd Quarterly Earthquake and Fire Drill for all Bunker personnel last June 13.