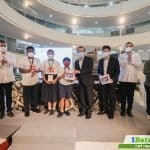 BALANGA CITY, Bataan- Chinese Ambassador to the Philippines His Excellency Huang Xilian paid a courtesy visit to Gov. Albert Garcia at the Bunker on Monday, April 18, and reiterated his “commitment to be a strong partner of the province” in its endeavors.

As he donated 200 tablets amounting to Php 1.6 million to grade school children from seven public schools in Balanga City, the ambassador also commended Bataenos for the friendship offered to his fellow Chinese citizens “who have been working and living here along with Filipino friends, who haven’t been back to our country for the past two and a half years, but they are enjoying their lives here.”

His visit started with a tour of the Chinese companies that have offered many job opportunities to Bataenos throughout the years located inside the Freeport Area of Bataan (FAB) in Mariveles.

For his part, Gov. Garcia expressed his gratitude to Amb. Xilian for helping Bataan in its fight against COVID-19 through their vaccine donations.

At the same time, Gov. Garcia also highlighted how China’s efforts at alleviating poverty has become an inspiration. “Their rapid economic growth made a hundred million people in their country level up and become the working class.”

He added, “the pandemic may have challenged all our plans but now that we’re moving on to the new normal, we are looking forward to the great bridge that will be built. I think this will really help us move forward.”