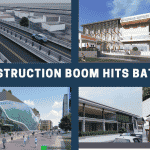 Construction boom is sweeping throughout Bataan province amid crisis brought about by COVID-19 pandemic and skyrocketing oil price and consumer goods.

Engr. Enrico Yuzon, provincial engineer, said numerous infrastructure projects are on-going in different parts of Bataan; some of them through Public Private Partnership (PPP) scheme, while others are funded by either the national or local government.

To mention a few, Yuzon said the P360- million Alauli Flyover (four lanes) is being constructed by the Department of Public Works and Highways, also the P240-M Bataan Convention Center beside the Bunker, the multi-million peso National High School for the Arts in Bagac, the P60-M public market in Pilar town, the P100-M Morong District Hospital in Morong town and the P100-M Bataan Peninsula State University Extension also in Morong.

Yuzon said there are infra projects in the pipeline awaiting approval and endorsement from the provincial board and concerned government agencies.

A hotel will soon rise on the site of Bataan Library and Youth Center insde the provincial capitol compound.