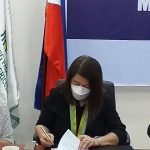 Dar was the keynote speaker during the signing of a memorandum of agreement between the Charoen Pokphand Foods Philippines Corporation and the Land Bank of the Philippines at the office of CPFP Aqua Feeds Plant in Samal, Bataan.

The LBP has partnered with the said Thai company to support hog, poultry, and aqua raisers expand its business operations.

In his message, Dar said there is no corruption in the Department of Agriculture. “If there is indeed corruption in DA I will be the one to investigate and have them removed from the service,” he warned.
Sakol Cheewakoset, vice-chair of CPF Philippines, said the company has envisioned to become the “Kitchen of the World that will benefit the host country. The company employs 3,000 Filipino workers.
“With this prime project, we also help the Philippine swine industry and the economy to recover through the best little way we can,” said Cheewakoset.