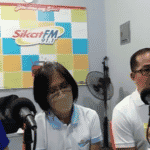 To keep the public abreast of environmental programs and activities, DENR Bataan has launched a radio program “Bataan at Kalikasan” in tie up with local radio station 91.1 Sikat FM. The program is aired Tuesdays and Fridays 9am to 10am, and can also be watched in the FB Live of the program’s anchorperson Dee Prevendido Cordova.

Wendell Baldeo, PENRO Information Officer, said the public can ask through the program various environmental issues and concerns in the province.

Penro Raul Mamac led the lineup of guests from DENR Bataan during the maiden airing of the program on Tuesday (May 31).

Aside from the regular programs of DENR Bataan, the public was also updated on the status of Manila Bay Rehabilitation Program highlighting the efforts of their agency and commending the strong support of Gov. Abet Garcia and the two congressional district representatives Cong. Geraldine Roman and Cong. Joet Garcia.