‘Development is the higher purpose’ 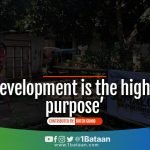 ‘Development is the higher purpose’

The demolition of houses in Barangay Sumalo is an outcome of a legal battle but does not stop there as the vision is to transform the area into a progressive industrial hub in the future.

Development is the higher purpose. This was the statement of Riverforest Development Corporation (RDC) Manager Dani Beltran when authorities demolished 47 houses of 73 families in Barangay Sumalo, Hermosa on Wednesday based on a court order. Sheriff Joel Magtuloy implemented the eviction order issued by the Dinalupihan-Hermosa Municipal Circuit Trial Court. Representatives of the Commission on Human Rights came to the demolition to ensure that the rights of the evictees were protected. Magtuloy said a relocation site in Barangay Saguing, Dinalupihan was offered to demolished families.

A day before demolition, the evicted families had an audience with Gov. Joet Garcia and Hermosa Mayor Jopet Inton. The mayor offered financial assistance worth P27,000 to each evicted family. RDC manages the 200 plus hectares land property titled to the Litton Family in Sumalo. “The Litton estate is very good prospect as an industrial hub given its accessibility and strategic location being near to two economic zones-Subic Freeport Zone and the Hermosa Economic Zone.

We are seeing great economic opportunities here like in particular providing employment among Sumalo residents”, said Beltran. He said it is very unfortunate that there are residents of Sumalo which he claimed are being hoodwinked by the barangay captain who are blocking the development of the village for almost four decades.

The post ‘Development is the higher purpose’ appeared first on 1Bataan.