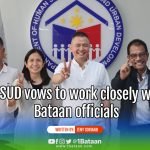 The Department of Human Settlements and Urban Development( DHSUD) is the central housing authority in the Philippines which provides a comprehensive and continuing urban development and housing programs, establishing a mechanism for its implementation and other purposes, thus, Secretary Jerry Acuzar has been actively engaging local government units throughout the country, especially the province of Bataan which is very close to his heart, to become partners in pursuit of President Marcos’ priority housing programs during his term.

To take advantage of this very important opportunity, Gov. Joet Garcia together with other Bataan officials paid a courtesy call, Monday to the DHSUD top brass headed by Secretary Jerry Acuzar encouraging them that the province of Bataan have the required land resources/areas enough for resettlement projects and other housing initiatives for its constituents.