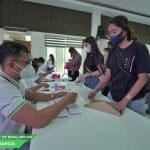 The Municipal Government of Dinalupihan gave out on Tuesday financial assistance to 1, 608 students under the Department of Labor and Employment’s (DOLE) Special Program for Employment of Students (SPES).

Garcia said the students were part of second batch of beneficiaries under the SPES program. The first batch received their financial aid on April 11, 2022.