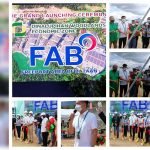 At the inauguration of the Dinalupihan Woodlands Economic Zone recently, Cong. Joet said in his message that the bill he authored, expanding the Freeport Area of Bataan is a very special law because not all investment promotion agencies (IPAs) are allowed to expand in certain areas, in fact according to him, outside Bataan only PEZA and BOI can declare and register ecozones in different places in the country.

Cong. Joet added that said law provides the Authority of the Freeport Area of Bataan (AFAB) the power and authority to provide our investors a one-stop – shop which is very important for our locators to transact regarding business permit and other requirements to set up our investment center in Dinalupihan.

He further explained that the IPA we have here, is like a super investment promotion agency of AFAB, and what we launched in Dinalupihan could be a “test case”, that there will be more IPA’s to follow from other provinces to undergo amendments of their charter, hence we need to show them that “this kind of IPA” has been very effective for those who have the means to expand and help the investors.

The hardworking congressman emphasized that the laws will always be there and the most difficult part is the implementation, or the law will be there, if no one uses it to provide employment and investments then it’s useless.

The good Congressman also mentioned that construction of the interlink bridge connecting Bataan to Cavite will soon start, making Bataan the center of Regions 3, 4-A and the NCR.

He likewise shared the good news that this year, the feasibility study for the railway project that will connect Bataan to Manila, Clark and Subic is about to begin, adding that the railway is for the transport of products from Manila to the ecozones in Clark and Subic, which means that Bataan will have a leg on this railway, most probably like SCTEX, the first station could be in Dinalupihan.

Previous A light of hope Next SOFT HEART’s gradual realization