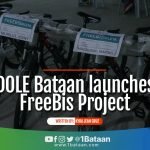 The Department of Labor and Employment Bataan launched its Free Bisikleta (FreeBis) Project last Monday, October 2, 2022, during the Flag Raising Ceremony at The Bunker.

Said project, also known as Bisikletang Panghanapbuhay is under the Integrated Livelihood Program of DOLE in partnership with LGUs and private sectors that aims to provide livelihood opportunities to displaced workers due to the COVID-19 pandemic.