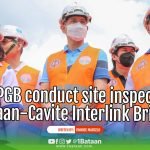 September 24, 2022 - In News By Maria Vinnise Marcelo Comment off

Last Friday, September 23, Department of Public Works and Highways (DPWH) Senior Undersecretary Emil Sadain and Bataan Governor Joet Garcia conducted a site inspection in the ongoing hole boring being done by the Trinity Surveyor vessel in the South Channel of the Bataan-Cavite Interlink Bridge (BCIB) which needs the deepest depth to hold a 900-meter tower, near Cavite. The 4-lane bridge is 32 kilometers long.

To date, about 55% of the geotechnical investigation survey has been accomplished and its detailed engineering design is set to finish in the first quarter of 2023. In his presentation, Technical Director for the Bridge Line of Business at T.Y. Lin International Marwan Nader, discussed the drilling process timeline.

Said bridge is seen to alleviate traffic congestion in Metro Manila and provide opportunities in Regions 3 and 4A which are currently positioning as competitive investment destinations in the country.