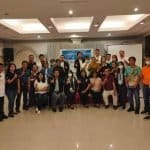 Department of Trade of Industry (DTI) Bataan has been regularly conducting “DTI Kapehan” or Meet the Press event to reach the public. DTI Bataan Director Nelin Cabahug believes that media can immensely help in informing the public of the agency’s programs and activities. The practice has in fact made the relationship between DTI Bataan and local media men cohesive and productive.

In the recent DTI Kapehan, a week ago, Bataan Chamber of Commerce and Industry (BACCII) Incorporated officers joined.BACCII officials said members are following minimum wage order set by the labor department. They also announced jeepney drivers get discount from BACCII establishments. Cabahug has urged the chamber to recruit more members to improve business in the province.

The DTI provincial director also said DTI Bataan has distributed livelihood starter kits worth millions of pesos to individuals and small businessmen in the province under the Pangkabuhayan sa Pagbangon at Ginhawa program. Each starter kit amounted to P10,000.00.